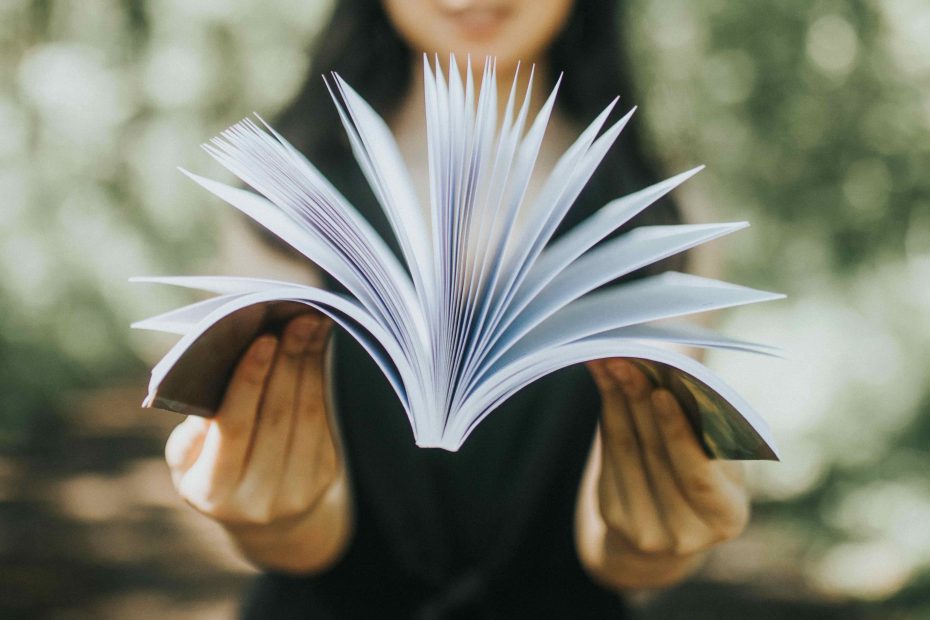 The first book that made me want to be a writer came into my possession by way of a swimming pool.

My family was vacationing in Port Aransas, Texas, a little Gulf of Mexico beach town that in the early 90s was kitschy, and a bit rundown compared to the more popular spring break locations like Corpus Christi or South Padre Island. The water was full of tar and jellyfish and brown, murky waves that sent you tumbling feet over head with every crash. We loved it. One year we stayed at La Mirage, a perfectly ordinary hotel that my siblings and I were convinced must be a favorite among celebrities because it had a small pool with a little waterfall that flowed directly into a larger pool. To a ten-year-old, it didn’t get any more luxurious than that. I spent my mornings lounging on a pool chair, like Elizabeth Taylor at La Mirage, reading a book I had borrowed from my elementary school library. I was just at the point when the protagonist first speaks to his future love interest when the heat of the sun became too much to bear. I tucked the book inside my towel and cannonballed into the pool where my brother and sister were already busy playing a game where they took turns trying to drown each other. After forty minutes and a gallon’s worth of chlorinated water sucked up my nose, I climbed out of the pool, grabbed my towel off the chair, and sent the book flying through air, straight into the water. It bobbed on the surface of the pool. The spine swelled and crinkled. The pages wilted, curling in toward each other likes hands reaching through the water for rescue.

“Well, I hope you were enjoying that book,” my mom said, coming to stand beside me, “because it’s yours now.”

I can’t recall how I found Judith Guest’s Ordinary People in my elementary school library. Perhaps the librarian suggested I read it, astutely recognizing a sad, introspective child who would connect to the themes of sorrow, self-reflection, and interpersonal struggle. I like to think that the book found me, though, calling out from the rows of shelves, pulling me toward it like a magnet. Here, read this. See what the world of words has to offer!

I was too young for this book, with its talk of death, suicide, sex, and marital strife. Looking back, it seems odd that my school library had it available in the first place, and somewhat irresponsible that they let a fourth grader check it out among a stack of The Boxcar Children and The Baby-Sitter’s Club given the subject matter, but I’m glad they did because reading it changed my life.

Having reread it many times now as an adult—the same water-damaged copy with its wrinkled pages and warped cover, a black X mark across the library barcode, the word deleted written in big bold letters across the title page—I can find faults in the storytelling. I’m uncomfortable with the wealthy, privileged world that’s depicted, and the only cursory recognition of that privilege. I think Beth, the mother, is given far too little sympathy for the complexity of her experience. She seems cold and unfeeling, focused on keeping up appearances, and desperate to move on from her family’s pain in a way that is dismissive of her child’s needs and her husband’s efforts for connection. She is deeply unlikeable, but I find myself now, as an adult with a child of my own, wishing I could read the story from her perspective—a mother who lost one son in a tragic accident, and nearly lost her second to his own sorrow. But when I first read Ordinary People, I wasn’t interested in Beth’s emotional experience. I connected entirely with Conrad and his sense of being on the outside of his own life, looking in.

I don’t have a tragic backstory like Conrad Jarrett. A terrible accident, survivor’s guilt, the pain of losing a sibling, a disinterested mother. I was just a sad child—a sad person—without the ability to articulate what it felt like to move through my life as though I were viewing instead of participating in it. Even as a young child I knew well enough to hold back a portion of myself, to pull a curtain across the part of me that felt anxious and weepy even when I was laughing and having fun with my friends. The part of me that, like Conrad, needed to be controlled, mitigated, pushed down, and hidden from the view of my peers. Though our reasons for being so were different, Conrad and I were both unwell from factors that went deeper than peer conflict or youthful disappointments. We were unwell at our cores, pained by the very act of having to be human, of having to wake up each day and start again, knowing that the sadness would be there—whether on the surface or tucked deep down inside, it was ever present.

Though Conrad was a teenager and male, reading about his experience of feeling disconnected from his life, of his constant, exhausting effort to fit himself into the spaces he’d previously occupied, to hold his emotions at bay so as to not isolate himself further, for the first time I felt like I saw myself in a character. And for the first time I felt like I understood how much writing could achieve, the depth of emotion it could convey, the complexity of human experience that could be illustrated with words alone. It was a marvel to me, like having a new world open up before me, but the world was one I could live in, one I did live in.

I have returned to Ordinary People again and again through the years, because I love the feeling of tapping into a part of my younger self who suddenly, miraculously understood how she most wanted to spend her time: writing about life. Writing about emotion, and connection, and the at once universal and wholly individual experience of feeling sad and alone in a confusing, complex world. I wanted to create characters who speak to the parts of ourselves that we tend to keep hidden, the parts we like to pretend aren’t there, the parts we think we’ll move on from someday when we are better, more whole, a different version of ourselves, but that stick with us in some capacity forever, little scars that heal, but never fully fade.

It is possible that if I hadn’t taken Ordinary People with me on vacation, hadn’t sent it soaring into the larger of the two pools at La Mirage in Port Aransas, Texas, I would have simply read it, returned it to the library, and moved on with my life, on to the next book. Have you ever read Ordinary People, someone might ask me one day and I would have said, Oh gosh, I think so—a long long time ago. But because I had to leave the book propped open for two days as the water dripped out of its pages, and then had to gently blow-dry it to be able to fold it back together so I could bring it into school, inform the librarian of what I had done, and pay to have the book deleted from the system and returned to my possession, Ordinary People stayed with me from that day forward.  It moved from bookshelf to bookshelf as my family changed houses three times, as I grew up and went to college, as I became an adult with a house of my own where I sit at my dining room table in the mornings and evenings, and for a brief glorious hour in the middle of the day when my son is sleeping, and write about the world. Whenever I feel lost in anxieties about my future, or in the lonely, dark hollows of my psyche, I return to this book. This reminder of the person I dreamed of one day becoming all those years ago. I want to make her proud, that little girl, that younger version of this grown woman who still so often feels like she’s on the outside of her own life looking in. Here you are, I want to tell her, you did it! You’re writing stories that hopefully, one day, will help someone else feel seen.

Claire Taylor writes poetry, short fiction, and the occasional essay. She makes up stories for kids in her monthly newsletter, Little Thoughts, and has written several picture books that are searching for a publishing home. Her work has appeared or is upcoming in Kissing Dynamite, American Writers Review, perhappened mag, and more. Her short story “Retreat” is published in Capsule Stories Autumn 2020 Edition. She lives in Baltimore, Maryland. You can read more of Claire Taylor’s work at clairemtaylor.com and follow her on Twitter at @ClaireM_Taylor and on Instagram at @todayweread.

Grab your copy of Ordinary People by Judith Guest on Bookshop.