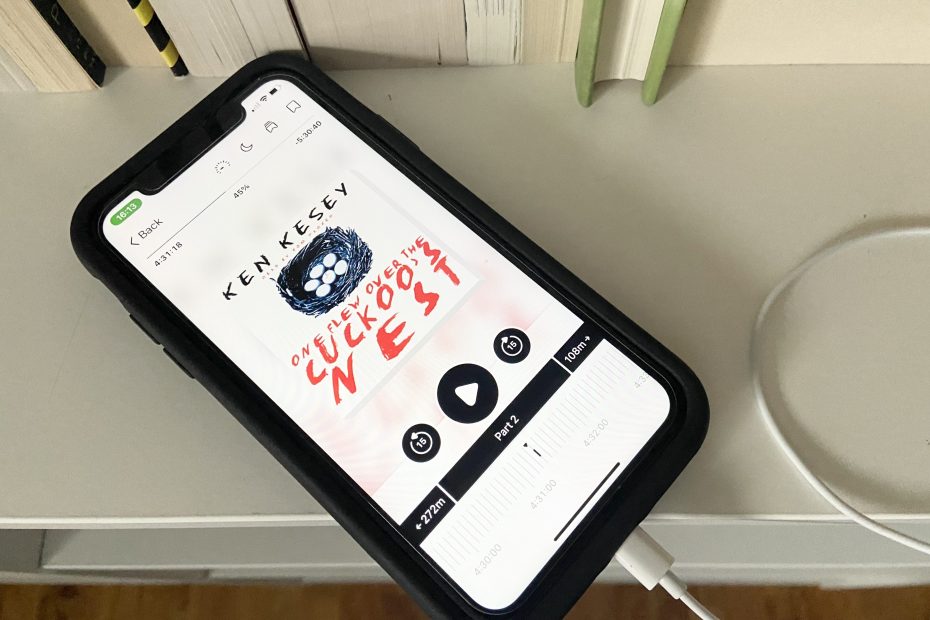 My sophomore English class was starting One Flew Over the Cuckoo’s Nest by Ken Kesey when I was going to have surgery. We’d completed all the pre-reading packets and vocabulary sheets, and the day everyone received their worn-out paperback copy from the stack in the classroom cabinet, I was in the hospital having a wrist operation. I went home groggy from painkillers with a full-length cast on my dominant arm for the second time that year. I would not be cracking open Cuckoo’s Nest and breezing through the first couple chapters for homework like the rest of my class.

In fact, I couldn’t hold a book. I couldn’t sit up in bed for the first postoperative week. My mother stopped at the library on her way home and picked up an audio recording of Cuckoo’s Nest and told me it would be a good idea to finish it before I went back to school. She plugged in the stereo and left it on my nightstand. I smiled weakly at the packaged set she placed next to me. Nine CDs seemed daunting.

“Do you want to listen to Cuckoo’s Nest?” my mother asked the second day I was home. She was already putting in the CD.

“Don’t worry,” she assured me, adjusting the volume. “You’ll get into the story if you just get started.” I wasn’t physically able to argue with her.

“One Flew Over the Cuckoo’s Nest. Disc One,” the stereo said in a masculine British accent. My mother left the room. I leaned my head back and closed my eyes.

“End of Disc One,” the British man said. I strained my eyes open.

My mother came into the room and placed a cup of water on my nightstand. “What happened so far?” she asked.

The next day I tried again.

“One Flew Over the Cuckoo’s Nest. Disc One.”

This was the third day after surgery, and I was a little more alert. I listened carefully to the voice of the man who was reading. The story’s narrator was different than the British man who introduced the disc—the real narrator had a subtle, alluring voice. It was soothing and soft-spoken, but it was also powerful and dramatic, perhaps in its very subtlety, similar to Chief Bromden.

Although the narrator was male, when he read the dialogue he became Nurse Ratched. He became every character. There was a roundness and depth to his voice. I could see the images of the words clearly in my mind. I felt the way Chief felt; I couldn’t see through the fog of my surgery yet, and I couldn’t see through the fog of the story. Nurse Ratched was still unconquerable, and McMurphy seemed helpful, but unattainable. As I learned about life on the ward, I felt like I was there, too—a patient, waiting until medication time.

It was exhausting to stay attentive for the entire disc, but soon I heard that familiar “End of Disc One.” I leaned over and pressed the eject button, collapsing back into sleep.

The next day I found myself anxious to continue. Nurse Ratched came back, with her orange lips and syrupy voice. She made me cringe and twitch uncomfortably. I felt the boys’ fear and frustration at Group Meeting. I listened to them talk among themselves and found myself joining in with their card games and leaning into the huddle to hear McMurphy’s crazy ideas that just might work.

The patients became my friends. I laughed whenever Pete Bancini whimpered “I’m tiiiired” or Ruckly said “Fuck ’em all.” It was the narrator who made me love the characters. And there was villainous Nurse Ratched, her voice creeping through the vulnerable spaces of the patients and through me, too. Her presence haunted me, even after the disc ended.

I fervently listened to each installment, always wanting more. By the fishing trip, I was out of bed and sitting up in a chair, feeling the waves rocking me. The prostitutes giggled and McMurphy belted out his “Hoooeee,” and I smiled and muttered “Hoooeee” right along with him.

I felt conflicted as I slipped in the last disc. I couldn’t wait to find out what happened, but I’d miss it too much if it ended. After staring at the stereo, my finger hovering over the Play button, I finally decided to put it off for a while. I’d get some homework done from the school I’d missed and listen to it later.

“Did you finish Cuckoo’s Nest yet?” my mother asked me after a couple of days. We were on a walk, and I was lugging my heavy cast around and trying to figure out how to use my legs again.

“No, not yet,” I answered. I hadn’t stopped thinking about it, but I just couldn’t bring myself to hear the final part. I felt happier knowing I had one more disc to go than nothing at all.

I went back to school and made up the quizzes easily, scoffing at the simplicity of the questions. I was confused why my peers didn’t get it. They didn’t understand the hatred toward Nurse Ratched, they described McMurphy as “uber cool,” and they asked what was wrong with Chief anyway? Why was he the narrator, if he was crazy? It seemed pretty stupid of this Kesey guy.

My class hadn’t finished the book, either. I was way ahead. As my English teacher read aloud a chapter I’d already listened to, I opened the book to the right page along with twenty other tired students. I waited for the tension and sincerity I’d already heard in this chapter, but it was just Ms. Skitch’s regular voice. Each sentence sounded the same, and soon I found myself bobbing in her monotonous waves. It was difficult to get a real sense of the Nurse’s and McMurphy’s battles unless you strained to follow along. I looked around the classroom. Hardly anybody was paying attention.

I went home that afternoon and finally pressed play. I sat back in the living room chair and closed my eyes. I listened as the narrator transformed into the characters. There I was, trembling through Billy’s suicide and hugging myself as Chief suffocated McMurphy. Chief escaped and ran away from Nurse Ratched and mental illness forever. The Combine didn’t control him anymore. The fog was gone. I cried because of the scariness of new beginnings. And because the family I loved was leaving the hospital. No more card games or baseball.

Without the surgery, I could’ve easily been another kid in that English class, barely bothering to engage with the assigned reading. If I’d read Cuckoo’s Nest to myself at fifteen, I’m not sure it would’ve had much impact on me. But the audio version changed me: the narrator was more patient with me than I would’ve been with myself. He helped me see, at a time in adolescence when I felt stuck, that nothing was permanent. That my body would heal, that there was life beyond high school. I took this lesson with me when it turned out four years later that the surgery hadn’t worked, and I had to have a more invasive operation. Then, in the long months of recovery—when I couldn’t write, when I couldn’t hold a book or focus on the words on a page—I knew I could slip in a disc and listen. And even if I fell asleep, I knew the next day I could start over.

Quinn Forlini (she/her) has writing in The Journal, The Greensboro Review, The Rupture, and elsewhere. She earned her MFA from the University of Virginia and lives in Pennsylvania. You can find more of her work at quinngilmanforlini.com.

Grab your copy of One Flew Over the Cuckoo’s Nest on Bookshop.