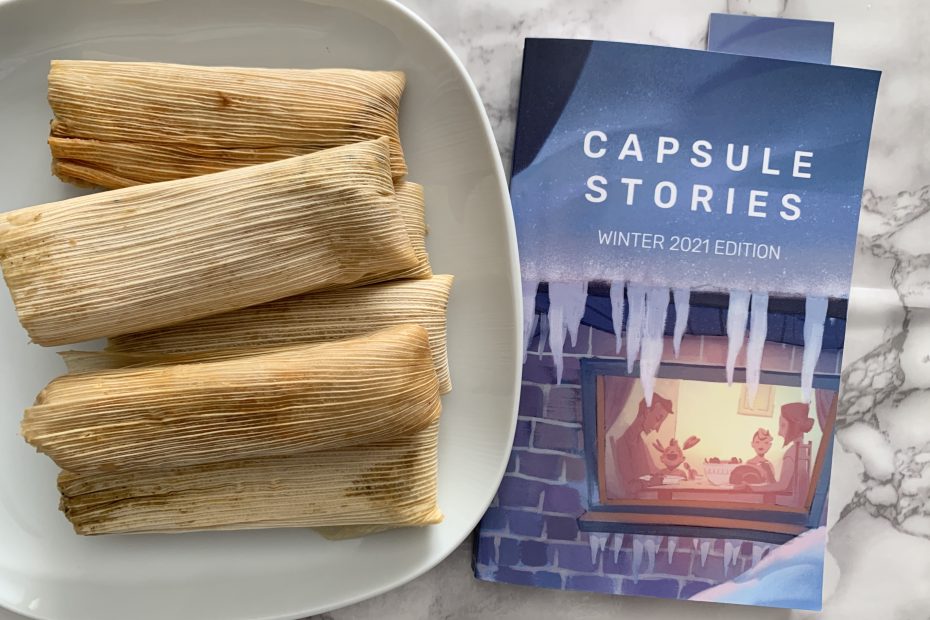 Joshua Flores manifested in Chicago with Spanish as his first language, and the struggle to learn English well led him to read. At ten years old, he pecked out short stories on an old electric typewriter. He hasn’t stopped writing since.

Joshua Flores’s creative nonfiction piece “Homemade Magic” is published in Capsule Stories Winter 2021 Edition: Sugar and Spice. “Homemade Magic” is a personal reflection upon the family gathering for the tradition of making Christmas tamales for the first time without his mother, who has died but is still somehow present with the family for this important tradition.

Capsule Stories: What came first with “Homemade Magic”—the tradition of making tamales, the idea of your mother’s voice, something else? Tell us about the story’s conception.

Joshua Flores: March had arrived, signaling the end of winter, but it also meant another anniversary of my mother’s birth date without her around to celebrate it. Her heart had given out a few years ago. Too soon but not totally unwelcomed as she had suffered from many maladies throughout her years. My father was sitting on his walker/chair looking out the front window. I knew his eyes saw the grass but his mind saw her. I saw her too. It was the smell coming from the kitchen.

My sister had brought home some tamales a relative had made. As the oven toasted them, the scent brought back my mother’s voice to me and the memories of the many Christmases and the family assembly line. I opened up my laptop and began writing “Homemade Magic.” The words I typed painted exactly how the memories and reflections played out as they were stirred into life by the heady aroma of masa and mole filing. In that, I wasn’t the writer, I was just the conduit.

Capsule Stories: You write about you and your sisters going through the steps of making tamales for Christmas and weave in your mother’s voice guiding you through the recipe, telling you what to do next. Why did you choose to structure the piece in this way? What effect do you hope it has on readers?

Joshua Flores: The structure, much like her teaching us how to make these treasured gifts, came directly from my mother. Her voice, her touch, her love guided my memories, my thoughts, my emotions as I typed. I had no goal or inkling of how it would affect any reader of the piece. My only need was to let myself pour onto the page, let the grief, the happiness, the missing, and the gratitude all mix together under her hands like the masa she had done for two generations. It was my job to spread her magic over the page, like the masa over the corn leaf. Not too thick, not too thinly, just enough to give the right support and flavor.

“Homemade Magic” was written primarily for me and my family. It has not failed to make me cry as I read it aloud to anyone who asks. Each reading brings my mother back to me. I hear her, feel her, smell her, and, most importantly, miss her.

Upon reflection, I hope “Homemade Magic” affects others positively—helps them cherish their mother, traditions, and memories.

Capsule Stories: You write: “Mami is missing. The laughter, the stories, and my sisters are there. But she is not. Is the magic still there? The stories are of her. They will be enough. They have to be.” How did you approach balancing these themes of grief, love, and the magic of this tamales tradition in this piece?

Joshua Flores: “Homemade Magic” came to be as a way for me to help cope with missing my mother. She is a very important part of me and who I am. Not many days have gone by in my life when I didn’t think of her. When she was hearing-able and I was in my twenties, I would call her during my lunch to talk to her. Just speaking with her charged me with all the energies I needed to finish my day with a smile. It was the magic she had: her love and her belief in us.

So as the piece was pouring out of me, the words formed themselves exactly as they needed. My emotions at the time were that big pile of mess—love, grief, pain, longing, happiness, and so on. How best to show the swirling waves dancing in my heart and soul? Memories and reflection with faith that they will be enough, enough to allow my mother to be with me—giving me her magic so I can make it through my day with a smile.

Capsule Stories: What ideas or images did you cut or add from earlier drafts of this piece?

Joshua Flores: The first drafts of “Homemade Magic” included the making of the traditional masa-based drinks of atole and champurrado, both of which were made by my maternal abuela. She and my paternal abuela, along with my tías, were part of the tamale assemblage when there were just a few of us in my mother’s brood—myself, a sister, and two brothers. These scenes were included to show how some of the holiday magic has already left our family, as those activities were dropped soon after my abuela left on to her next journey.

I had set a goal of having a max word count of 1,000 words. The first drafts were coming in at 1,500 words. Those scenes were cut to accommodate the target. The decision to cut them was not difficult because they diluted the real message of what the essay wanted to say. So off they went, now filed away to be possibly used in another piece in the future.

Capsule Stories: What are your favorite recipes to make over the winter holidays?

Joshua Flores: My parents are from Mexico, but I and my siblings are Chicagoland born. Therefore, our recipes have adjusted accordingly as we assimilated into the American melting pot. Besides tamales for Christmas, we may have hot chocolate made from “Abuelita” Mexican chocolate rounds; atole, a masa-based drink; arroz con leche, or Mexican rice pudding; and of course leftover mole.

For Thanksgiving, being a US holiday, we may have a turkey or two, sometimes accompanied with a baked ham, boiled sweet potatoes, mashed potatoes, dinner rolls, sausage stuffing, egg and potato salad, buttered corn kernels, and many varied pastries and desserts.

Capsule Stories: Why do you write?

Joshua Flores: Writing is part of who I am. Stories have been part of me since my earliest memories, both hearing and telling them. Then when I learned to write and read at the age of five, my need for stories in my life increased. When I couldn’t find the stories in my head somewhere to read, I wrote them down so they existed. Been that way for fifty-odd years now.

Joshua Flores: This is a hard question I would think for most writers because of how many authors we have read and loved. I have to start with Lester Dent, a.k.a. Kenneth Robeson, who wrote most of the 181 adventures I read with my first superhero idol—Doc Savage, a.k.a. Clark Savage Junior, and his team The Fabulous Five.

There are many other authors I read via comics and magazines and anthologies that I have long forgotten the names of, but they were all important to me.

When it came to novels, Anne Rice, Octavia Butler, J. K. Rowling, Robert Bloch, Harlan Ellison, Frank Herbert, George Orwell, Jules Verne, and quite a long list of other authors that I can’t remember right now would read as a who’s who of writers.

Joshua Flores: I currently write flash fiction stories, mostly within the magical realism genre. But I do have several ideas for books, and maybe one day I will gather the courage to bring them into existence. Flash is easiest for me. I can do a story within a couple of days and work on it for a bit. I do have close to two hundred flash pieces in my archives, many of which will require major rewrites to be publish-ready as I have learned a lot about my craft since they came to be.

You can find Joshua Flores on Facebook at @JoshFloresAuthor, on Twitter at @JoshFloresAuthr, and on Instagram at @joshfloresauthor. He has an Amazon author page and Goodreads author page. You can also find more of his stories published in online magazines around the internet.