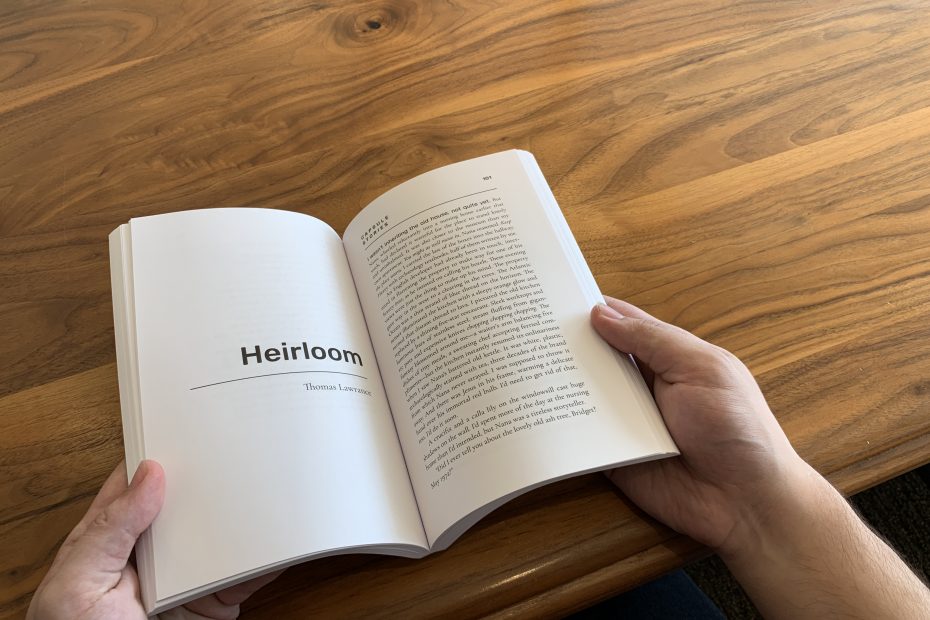 Thomas Lawrance is from the United Kingdom, but he lives in Ireland, where he writes fiction and performs stand-up comedy. His writing has appeared with Bandit Fiction, Brain Mill Press, Montana Mouthful, The Bookends Review, and others.

Thomas Lawrance’s story “Heirloom” is published in Capsule Stories Autumn 2021 Edition: Dancing with Ghosts. Suffering for centuries under British rule, Ireland (and its attendant sense of national identity) has endured a notoriously turbulent history, and its countryside is full of ghosts. Indeed, there are many bodies missing that have never been—and may never be—found. In “Heirloom,” Bridget, an archaeologist at a local museum in Ireland, unearths a decades-old secret in the bog in her grandmother’s backyard.

Thomas Lawrance: From the ground. Specifically, from the peat bogs of County Offaly and County Meath.

The National Museum of Ireland in Dublin has several Iron Age corpses on display, astonishingly well preserved after 2,400 years submerged in a peat bog. Clonycavan Man still has a full head of hair, styled with pine resin. Many of the bodies bear signs of violence—perhaps they were ritualistically sacrificed, or simply murdered and tipped into a swamp.

Ireland has a tragic legacy of hidden bodies—from the Disappeared of the last century to the hundreds of dead babies recently discovered in a septic tank at a Mother and Baby Home run by nuns. I thought of these horrors as I gazed at Clonycavan Man’s perfectly preserved features.

Capsule Stories: The setting, Ireland, is central to “Heirloom.” Why did you want to explore Ireland as a setting? How did you approach writing about Ireland and its history as someone from the UK?

Thomas Lawrance: A couple of years ago, I saw the novelist Julian Barnes giving a talk. I was lucky enough to speak to him afterward, and—leaning in to impart wisdom to another Englisher—he observed the importance of seeing your own country through the eyes of another.

Despite being our closest neighbor and long-standing national punching bag, Ireland is absent from English education. In fact, the entire history of the British Empire exists only as a half-remembered nostalgic fever dream, kept alive on commemorative silver coins and in a national anthem that would embarrass the Tudors. Britain is the one place in the world where Britain is not seriously discussed.

The English curriculum would have children believe that Earth sprang into existence in 1939, purely so that Winston Churchill could make speeches and single-handedly win a war. When I moved to Ireland, I made a conscious effort to learn more, partly through watching VHS transfers of old Peter Taylor documentaries about the Troubles, but mainly through general sociocultural absorption. I’ve lived here for five years; when I see a tourist wearing a Union Jack, I cringe.

Living in a country with a history like Ireland’s has heightened my appreciation of the purpose of storytelling, and storytellers. I’m keenly aware now that stories don’t exist in a narrative vacuum. Writers like Frank O’Connor and Edna O’Brien capture something of time and place and manage to transport it, crystalized, into the reader’s brain. Ireland has a canon of songs that stretch back centuries, originating long before their melodies and lyrics were ever written down. You can’t travel more than five miles without crashing into the ruins of a castle.

I thought it sensible to at least try to engage creatively with all this stuff. I started by getting rid of my Union Jack pencil case.

Capsule Stories: How does the story “Heirloom” speak to our theme Dancing with Ghosts?

Thomas Lawrance: It’s almost literal. There’s a dead body, and the rest of the characters dance around the truth. It happens a lot, as in the tragedies I mentioned earlier.

And I suppose the protagonist—archaeologist Bridget—is struggling to position herself in the heritage (and the farmhouse) left by her fading grandmother. Sell up? Preserve? Inhabit? What’s the point in keeping that old picture of Jesus? Do you tend to the ghosts or exorcise them?

Perhaps you put the unhappiest ghost in a museum and hope nobody examines it too closely.

Capsule Stories: The dialogue in “Heirloom” is so sharp and funny. How do you approach writing dialogue in your stories?

Thomas Lawrance: Thank you for saying so. I don’t dare go back and check if you’re right. I worry about dialogue sounding rubbish—sometimes I’ll revisit lines and trim out as much exposition and formal language as possible. It can help to recite things out loud (quietly, if you have housemates) to see if the words sound anything like real conversational speech.

Capsule Stories: How has being a stand-up comedian influenced your fiction writing, and specifically, this story?

Thomas Lawrance: I’m still learning about how stories work, but I guess a lot of them are structured like jokes. “Heirloom” essentially ends on a punchline. A knock-knock joke has a setting, characters, anticipation, and an inevitable twist—it’s a five-second episode of The Twilight Zone.

Thomas Lawrance: During the pandemic, I’ve read fewer novels and far more short stories—which in turn has prompted me to write more of my own. I also read Will Storr’s book The Science of Storytelling, which was hugely educational. After reading that I destroyed all my notebooks and started again.

I consider all consumption of storytelling to be productive—which helpfully transforms laziness into active artistic pursuit. Whether it’s a Netflix docudrama about a murderer, a triple-decker Victorian novel, or a guilty-pleasure sitcom, there’s always something useful to absorb (even if it’s how not to write). And I’ve been watching a lot of Netflix docudramas about murderers.

Thomas Lawrance: More short stories and endless adjustments to the sixty-first draft of a novel that will never be complete.

You can find Thomas Lawrance on Twitter at @_ThomasLawrance, and he collects everything on a blog with a nice background theme at thomaslawrancewrites.wordpress.com.