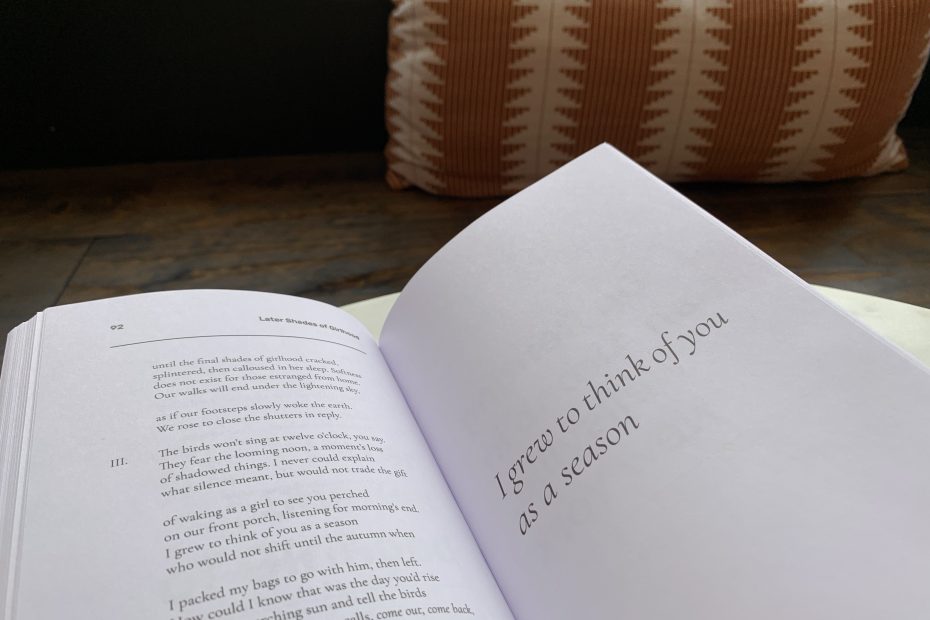 Sheila Mulrooney has an MA in English literature from the University of Toronto. Her work has appeared or is forthcoming in a number of literary journals including Okay Donkey, Lost Balloon, Wrongdoing Magazine, and others. She is a reader for Autofocus and is at work on her first novel.

Her poems “Later Shades of Girlhood” and “On Renting an Airbnb in Wellsville, New York” are published in Capsule Stories Autumn 2021 Edition. “On Renting an Airbnb . . .” is an account of a young woman who tries to escape from her past by going somewhere completely new, only to find that every place carries its own past, making escape impossible. “Later Shades of Girlhood” is a series of three sonnets in blank verse, recounting the story of a young woman falling in love despite the concerns of her immigrant parents.

Capsule Stories: Where did the idea for each of these poems come from?

Sheila Mulrooney: I wrote “On Renting an Airbnb . . .” after living in four different places over the course of six months. Moving around that often, getting acclimated to a new home or apartment again and again, made me think of how spaces have an existence unto themselves. Every location has its own history and—for lack of a better term—life. This can be exciting and riveting, but also oppressive and difficult, especially if you want an untouched space where you can grapple with your own ghosts, independent of anyone else’s.

“Later Shades of Girlhood” came from a conversation with my grandmother and her mother’s experience immigrating to Canada from Ukraine. There are so many losses tangled into every immigration story, including loss of home, tradition, language, family. But there’s another loss the poem explores as well, the loss of my grandmother’s girlhood as she falls in love for the first time. In the poem, these losses operate on parallel planes, creating a kind of irony, for even though both subjects are undergoing a profound loss, they never speak to each other about their experiences. This leads to the third loss, which is perhaps the most immediate and pressing: the loss of their intimacy with one another.

Capsule Stories: These poems capture this idea that we’re always looking for in the work we publish: stories that show what living in this world as the human you are is like. You explore this idea of specificity in “On Renting an Airbnb in Wellsville, New York”: “The cottage could be anything and the ghosts could be / anyone, except that they couldn’t.” This creates the sense that these images and ghosts in the Airbnb aren’t merely metaphors or imagery, they’re real, they have a specificity that brings them to life. Can you talk about the specificity in these poems and how you explore that theme?

Sheila Mulrooney: For me, exploring specificity in “On Renting an Airbnb in Wellsville, New York” was a damning, and really interesting, process. When you rent a space, you’re temporarily occupying it, and the assumption is that it should be empty and clean, ready to be inhabited. But writing this poem, I realized that this is never really the case. Every space has its own specific history, its own “ghosts” that live there. I think we often try to colonize spaces, at least in our personal lives, overlaying rooms with our own decorations, furniture, whatever. But I think we assume too much. A space can’t just be transformed into anything, based on our desires. We have to reconcile ourselves to reality, and the reality is that we never “own” anything outright. We’re always contending with what came before.

Sheila Mulrooney: The idea of softness is really important to me these days, mostly because we live in a world that has none. I often find myself falling into this dichotomy: when I’m with people I love, that is to say my “home,” I can be soft and vulnerable; but when I’m out in the world, among strangers, I’m “hard,” and don’t engage with people sincerely. I try to catch myself thinking this way, and change it, because I do believe that primarily through softness and intimacy, we can reconcile our deeply divided age.

Of course, in the poem, softness is robbed from the speaker’s mother as a result of the immigrant experience, and that’s a real loss the speaker of the poem doesn’t understand.

Capsule Stories: You write: “I grew to think of you as a season / who would not shift until the autumn when / I packed my bags to go with him, then left.” What draws you to write about the changing seasons (of weather and of life), seasonality, coming and going?

Sheila Mulrooney: The seasons always find their way into my writing, no matter how hard I try to keep them out! I think one of the most enticing things about the seasons is how they are both never-ending, but dynamic. It’s easy to fall into thinking that never-ending things—i.e., things that repeat themselves over and over—are static and therefore uninteresting. But the seasons are lovely because no matter how many winters or autumns you see, they’re always new. They have this dynamism unto themselves. And of course life is like that too. Generations go through the same traumas and losses, as well as the same joys, but it never gets old. Every new generation lives through it all again, as if everything was happening for the first time.

Capsule Stories: You tweeted that one of these poems is one of your favorite pieces you’ve ever written. Which one is your favorite, and why?

Sheila Mulrooney: I loved the experience of writing “Later Shades of Girlhood.” It was an intensely personal poem to write, and for that reason it went very slowly. I wanted to represent the experiences of my grandmother’s family faithfully, despite having only heard stories about their immigration journey. Writing in blank verse helped me choose each word and complete each line deliberately, and the sonnet form forced me to structure my thoughts. A danger for me when writing such personal pieces is to write forever, simply because I have so many images and memories. Stepping away from that and trying to create some bridge between a formal poem and the messy reality was a challenging, frustrating, but ultimately rewarding experience.

Sheila Mulrooney: “On Renting an Airbnb . . .” is entirely indebted to Lucy Wood’s “Notes from the House Spirits,” which is a lovely account of how places inherit and accumulate identity over time. I was reading a fair amount of Elizabeth Bishop when writing “Later Shades of Girlhood.” Her relationship with formal poetry is fascinating and inscrutable, and provides a wealth of inspiration for beginner poets.

Sheila Mulrooney: I am finally closing in on the end of my first novel! As anyone who has written a novel can tell you, it is a slog of a project. Looking forward to finally finishing and moving back to some more poetry and short fiction. Meanwhile, I can be found on various corners of the internet, but most recently in Okay Donkey and Autofocus (where I write about my other grandmother).

You can find Sheila Mulrooney on Twitter at @SJosephine10.