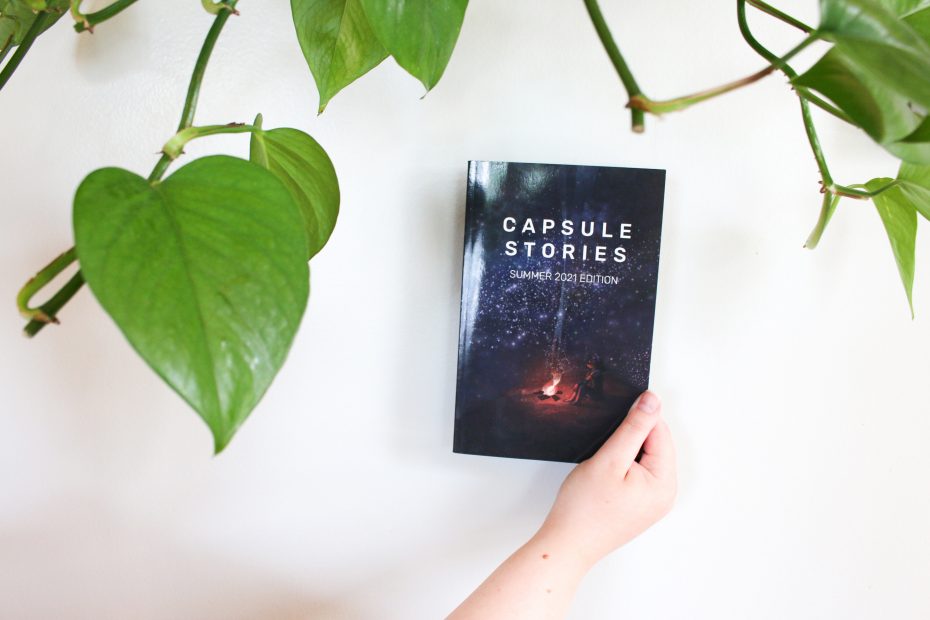 Mallory Pearson is an artist and writer living in Brooklyn, New York. She writes about themes of folklore, femininity, and loss, and how these elements interact with the Southern United States.

Mallory Pearson’s poems “The Desecrated Wood,” “Instead of Sleeping,” and “A Dirt-Red Star Shaped Like Mars” are published in Capsule Stories Summer 2021 Edition. The poems are all about the reeling feeling a summer leaves you with; the humid cling of the sound of cicadas, the overwhelming smell of honeysuckle. They’re dense blocks of prose that are heavy and languid and encourage a little bit of steeping. They take place in woodsy areas where there are no lights to block out the stars.

Capsule Stories: What came first with these poems—the feeling, the prose style, the setting? Tell us about these poems’ conception.

Mallory Pearson: Setting plays an enormous part in my writing and is typically what spurs my inspiration. I’ve always felt drawn to landscape in particular, and I love exploring the effect it has on the poems I write. “The Desecrated Wood” came into being after I spent a summer at an artists’ residency on a farm in Indiana, living in an old house and making books in a crumbling barn. “Instead of Sleeping” was born out of rural Pennsylvania, where I stayed with a few of my best friends and spent the days driving around and picking apples. I grew up in Virginia, and it holds a dear place in my heart; “A Dirt-Red Star Shaped Like Mars” is all about another summer I spent there while I was in college, half in love with the land, and half in love with a girl.

I started these poems as notes made in my phone, where I didn’t focus on line breaks and decided instead to just spew whole paragraphs of dense text in an attempt to convey what the landscape did to me. It felt impossible to capture how these spaces made me feel—how endless they were, and how full of magic. It’s that moment when you’re standing in the woods, looking up at the trees, and you feel the whole forest looking back at you. It’s a sensation bigger than words.

Capsule Stories: These poems have a pulsating heaviness; they feel languid, hot and sweaty. And the striking style of “The Desecrated Wood” and “Instead of Sleeping” has a lot to do with that: prose poetry, all lowercase letters, run-on sentences that feel as if the narrator is aching to get the words out. Tell us about the stylistic choices you made in these poems and what effect you hope they have on readers.

Mallory Pearson: I wanted these poems to feel like the moment after waking from a dream—that rush to remember everything that made you feel out of control, the flitting-image sensation of trying to cling to the pictures you just held in your head moments ago. As I mentioned before, these began as notes in my phone typed out without any consideration for line breaks. They were simply huge chunks of text that poured out like confessions.

After writing them, I tried a few different approaches, even breaking them down into more “traditionally” structured poems, but I loved the frantic energy that came from mashing these blunt and scared sentences together. They speak to the kind of emotion I felt while writing them—a certain desperation with a conversational tone, like trying to explain something to a friend and the panicked hurry to finish speaking before they can misinterpret what you’re saying.

Capsule Stories: Your poems feel cinematic in their visual language. For example, in “The Desecrated Woods,” you write: “don’t ask me if you don’t want to hear that it was like the car had run out of gas, and the rain was a current down the cul de sac, and the summer was a woman with her hair pulled back, and the cicadas were humming to each other just to get the vibration out, and the pool was sputtering through its drying mouth, and the billboards called out about loving your sins, and my body became a blooming thing like the leaves of a revived ash tree, and it was on fire, and it was ash again, eventually.” Talk about how you came up with and developed these images to create such vivid imagery and metaphorical language. Are there any ideas or images that you cut from earlier drafts of this poem?

Mallory Pearson: There’s nothing I love more than a two-lane highway backroad, the kind of winding thing that whips through the mountains. I love the way the trees hug close to the road, and how they split to make way for wide-open skies. Every billboard feels like it has its own story to tell, and I wanted “The Desecrated Wood” to feel like a movie that leaves you with a sickly feeling in the pit of your stomach while the humidity cooks you in the coming night.

This stanza began as a list of things I made while sitting in the passenger seat of a car, documenting all the things about an Indiana summer that made me feel out of control while traveling from Virginia to the Midwest. It felt like an opportunity to provide an honest answer to a common question: How was the trip? The trip was a dream twisted and turned around into knotted shapes. I considered leaving this stanza as an entire poem on its own, but in the end I decided that I loved the way it flowed into the rest of “The Desecrated Wood,” as it set up this bitter overview for a quiet moment out in sprawling fields.

When it comes to cutting images from this poem, I have to admit that I’m pretty awful at editing myself; with “The Desecrated Wood,” it was always more, more, more. I think I could have happily gone on for pages with lines in this stanza, pointing out the things that make a rural summer so painfully gorgeous.

Capsule Stories: You write about themes of folklore, femininity, and loss, and how these elements interact with the Southern United States. How do you approach exploring these themes in your poetry? Why are you drawn to them?

Mallory Pearson: Before I seriously considered sharing my poems, I focused solely on painting. My paintings always revolve around landscape and land as body. I became obsessed with abandoned houses and people as houses—toothy jaws of splintered wood, mournful empty windows with the glass knocked free, sagging frames like sloped shoulders. I considered the implication of an abandoned house. When the structure is empty, what energy remains? When the land wears away the home, does it breathe in that residual haunting?

Growing up in the South, these structures were as familiar as the rising sun. I saw them everywhere I went, and I wanted to explore these questions through my poems. What does it mean to view a house as a body, or vice versa?

This tied into explorations of grief. After the passing of my grandmother, I spent years trying to understand the intersection between femininity and the implications of being a Southern woman: especially when it comes to homeland, family, and queerness. There are so many aspects of existing as a woman in the South that seem to contradict the actual nuance that lies beneath the assumptions.

Capsule Stories: How do you approach titling your poems? Can you talk about how you landed on the titles for these poems?

Mallory Pearson: When it came to titling “Instead of Sleeping,” I wanted the whole poem to feel like a continuation of that phrase. My goal was to be able to answer the statement of “instead of sleeping,” with one of the lines to follow, such as: “i took a break from being a know-it-all.” My hope was to emphasize the stream of consciousness feeling previously explored with this title, by allowing everything to flow into one repeated phrase.

“The Desecrated Wood” was born out of that idea that the woods are alive and watching. In a way, it was almost a love poem to the landscape, an apology to the trampled earth and fading foliage. I wanted the whole poem to revolve around the earth; while it talks about the people who traverse it, the poem always comes back to the land they’re living on and how it ties them down.

“A Dirt-Red Star Shaped Like Mars” was inspired by a line in “Emily” by Joanna Newsom, where she says: “Pa pointed out to me, for the hundredth time tonight / The way the ladle leads to a dirt-red bullet of light / Squint skyward and listen / Loving him, we move within his borders / Just asterisms in the stars’ set order.” I find her songs to be just as inspiring as the work of some poets I read, and the celestial descriptions in “Emily” gave me the same homesick longing that I wanted to convey in that poem.

Mallory Pearson: I had the incredible opportunity to speak with Eileen Myles while working on these poems, and their influence was a huge inspiration on the blunt and stream of consciousness writing style I employed in “Instead of Sleeping” and “The Desecrated Wood,” especially when it came to the portrayal of lesbianism in prose poetry.

Throughout the time I spent on these poems, I was also reading Bestiary by Donika Kelly. The way she discusses queerness, love, and femininity is absolutely incredible; “Love Poem: Centaur” strongly inspired “A Dirt-Red Star Shaped Like Mars.” The line “nothing approaches a field like me” hit me so intensely, and I thought about it over and over again for weeks after first reading it.

Some other writers that inspired me while working on these pieces were Jenny Xie, Dawn Lundy Martin, Lyn Hejinian, Rebecca Dinerstein Knight, Nava EtShalom, and Stacy Szymaszek.

Mallory Pearson: I recently finished drafting my first novel, and I’m currently in the process of querying it. It’s the first in a series about queer witchy women and the beauty in found family, set among the rolling mountains of Appalachia. If you liked these poems, my novel pulls from an incredibly similar method of using language and cinematic description; it’s my hope that it will one day be available to the world! In the meantime, I’m also working on some short stories while I transition between the novel-writing process and my poetry that I hope to also put out into the world soon.

You can find Mallory Pearson on Instagram at @the.lesbrary, where she talks about all things sapphic and readable. She’s also on Twitter at @yourmanne, and her website is mallorypearson.com.