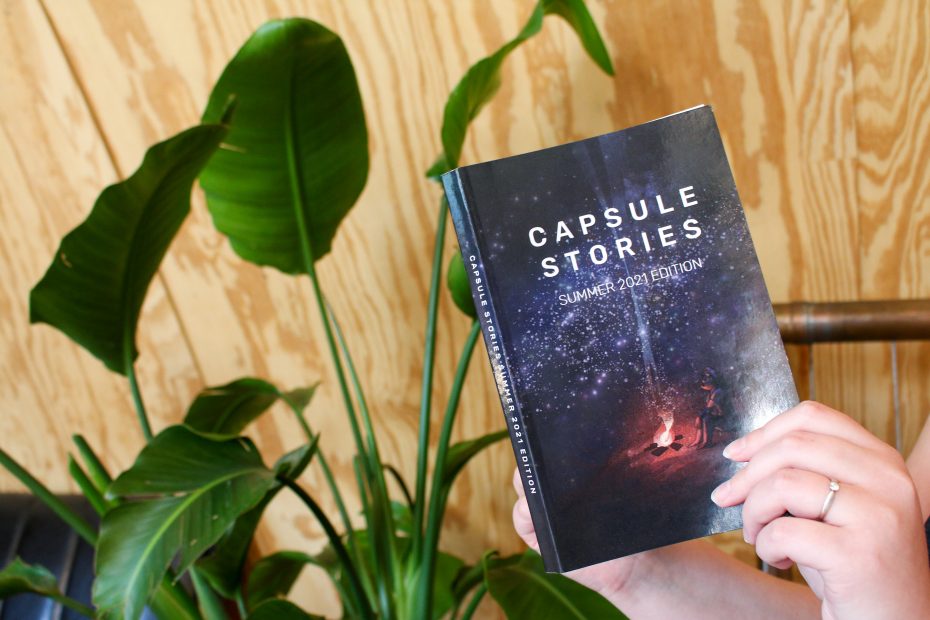 Jaime Dill is an accomplished book coach, founder of Polish & Pitch editorial agency, and editor-in-chief of Cardigan Press who uses her precious downtime to pour her lesser-known self into free verse poetry. Jaime’s writing reflects her professional interest in language while also ripping apart the rules to show the world the raw beauty of emotion and femininity. This is best seen in her debut poetry collection, I Remember Us, praised as “a time capsule of a relationship’s most precious and sometimes painful moments.”

Jaime Dill’s poems “I Remember Us,” “Est. 2005,” and “Kinetic Kindling” are published in Capsule Stories Summer 2021 Edition. “I Remember Us,” on the surface, is a look back on a relationship’s origin. But in between the lines is a declaration that sometimes naive summer love can last for the long haul. “Est. 2005” plays on specificity, detailing the unique-to-you things that feed the first months of new love and nurture it still years later. “Kinetic Kindling” leans into the mystical properties of dancing flames under starlit skies, highlighting the way in which the atmosphere makes us search for our place in the universe.

Capsule Stories: In “Est. 2005,” you write: “We don’t have that fancy sort / Of nostalgia the kind where you / Vacation some place you honeymooned / Or buy new rings and repeat vows” Your poems capture specific moments in your relationship. How do you approach writing about these nostalgic moments that you and your husband shared while making the poems feel so universal?

Jaime Dill: The most ironic thing about making something universal is the need to zoom in on the details. We think, “Oh, I have to make this apply to as many people as possible, so I need to use broad terms,” but in reality, that makes the piece vague and shallow. Neil Hilborn, a poet idol of mine, has a piece that says, “Thank God you aren’t special” (“This Is Not The End Of The World”), and I cling to that when I write the specific things from my life, knowing that even if I think this is only happening to me, it’s surely happening to someone else too. Even if I write about a lover’s green eyes and the reader loves someone with brown eyes, it’s the emotion behind the line that hits in the chest.

Capsule Stories: Where did the idea for writing poetry about your relationship with your husband come from?

Jaime Dill: Poetry has always been my go-to for expressing how I feel about someone. Love notes with corny lines were abundant and constant early in our relationship during the high school years. And not just from me; he wrote them too. And they’ve always maintained a nostalgic tone. I had the thought of compiling a bunch of poems I had from that time for our tenth wedding anniversary, but they were obviously way below my current writing level. So I started picking lines from which to reinvent things. There were many nights when I would ask him what memories he thinks of the most and that conversation would always lead to a new poem or two. Eventually, it became such a habit and happy place that I decided to make a full collection the goal. I didn’t think to share it with the world until a close friend beta read a few and expressed how much they reflected her own love experience. That’s when I began thinking that maybe a lot of sweethearts in the world could appreciate the sentiment.

Capsule Stories: Tell us about your debut poetry collection, I Remember Us, which includes “I Remember Us” and “Est. 2005”!

Jaime Dill: I Remember Us is a unique project for me in that I didn’t carefully plan the arrangement or the content. I just wrote what was on my heart. When you’ve been with someone for over a decade, you let daily life replace all the spontaneous moments that used to feel like the center of the world. At some point, the mundanity of it becomes too much and you need the trip down memory lane to remember who you were and who you still want to be. I Remember Us is me sitting down with paper and capturing all the moments that feel like the core of who we are as a couple. There are moments from early dating life, college, kids, moving, stagnation—and I left it in the order I thought of it. I had this moment where I thought I would rearrange everything to be in chronological order, but then I left it alone because memory doesn’t work that way. We think randomly, and I wanted that stream of consciousness to stay intact to show how everything comes full circle.

Capsule Stories: How do you balance your personal writing with editorial work?

Jaime Dill: Balance depends on what stage I’m at in production. If I’m conceptualizing, then I’ll let inspiration come when it pleases. And that can be really sporadic. But once I tell someone it’s a thing that’s happening, especially readers of my previous work, I feel more motivated to make writing a priority because I now owe them. I often need that push of obligation since editorial work always comes in first place as my full-time job. I admittedly have a hard time choosing my art over someone needing my help with theirs. In that sense, my work is my sanctuary, my self-care.

Capsule Stories: What does your writing process look like?

Jaime Dill: My best poetry requires only two ingredients—being half asleep and my cell phone. My mind is always more creative and clever when I’m either trying to fall asleep or just waking up—that dream space where your body is completely relaxed but your mind is starting to spark. This is a lot more convenient in the morning than at night since shutting it up to get a full night’s rest can be really difficult. But every time that happens, I quickly grab my phone and jot the lines down in Google Keep, or sometimes I’ll even tap the last person I texted and put it there—which is always funny later when they’re like, “What is this?” and I say, “Just hold it for me.” Sometimes I need a poem to be more on demand though, and that’s when I’ll revisit poetry I’ve already written or put on an album that gets me in the right feels and try to chase down something workable.

Capsule Stories: Who do you look up to for inspiration?

Jaime Dill: I know I’m supposed to name drop such and such poet. But actually, I’m most inspired by singer-songwriters. I have no doubt in my mind I would be a recording artist if I had been raised on instruments and cultivated a talent for writing music. I really want to write songs, but I’m too afraid that the lyrics alone aren’t enough. I’ll have days though when I will put on an album and listen to it for eight hours straight, picking out rhythms and details and emotion. My latest obsession is LANY, and I can’t tell you how much time I’ve put into listening even to their interviews to learn where they get ideas, how they cultivate their craft, and why they wrote a song the way they did. The sound of the words transports me to an ethereal place, and I try to replace that vibe in my poetry with interesting line breaks and metaphors to get a similar effect.

Jaime Dill: My next project started out being an expression of what life is like being a support system for so many friends and family dealing with mental illness. There’s so much you can’t say when you’re trying to put their feelings first, and I wanted to show how even though it’s hard on me to do that, it’s always worth it. But I’m terrified that it’s too dark on the heels of such a light and loving collection like I Remember Us. Within that hesitation, I found the inspiration to think about why I’m afraid, why I’m always unsure of indulging my impulses. And that’s when I got the idea to make my next collection about my insecurities. I threw all inhibitions out the window for it too. I figure, if I’m going to put it all out there, I need to make it as transparent as possible. So I drew up a cover design that is basically an outline of my body with all the parts I don’t like and wrote in the corner Trying to Be Me as the title. I’m already uncomfortable as I explore ideas, which tells me it’s probably the right way to go.

Learn more about Jaime Dill and her various literary worlds at linktr.ee/jaime_dill.