Emily Polson on Adapting the Sonata for a Romantic CNF 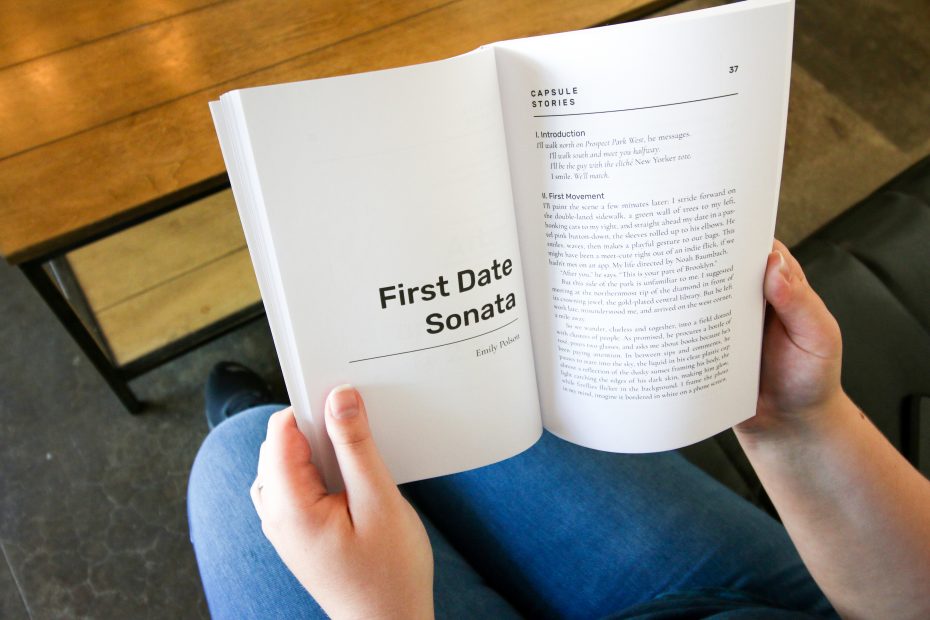 Emily Polson holds a BFA in creative writing from Belhaven University and has been published in Catfish Creek, FEED, 433 Magazine, and the Brogue. Originally from Central Iowa, she now lives in Brooklyn and works at Scribner.

Capsule Stories: “First Date Sonata” is structured in five parts: an introduction, three movements, and a coda. How did you arrive at this structure, and what effect do you hope it has on readers?

Emily Polson: I studied classical piano from ages five to seventeen, but the decision to use a form borrowed from music was originally inspired by my interest in poetry. Whether you’re writing free verse or a sonnet, form in poetry is used to help shape and suggest meaning. I wanted to take that idea into prose and started experimenting with borrowing form from other types of art. This piece started as “First Date Triptych,” in which I put the three main scenes next to each other to see what they became in conversation. The story didn’t divide neatly into just three sections, though, so I looked for other forms that might allow for brief opening and closing sections.

While there are a few variations of sonatas, one has an introduction, three movements, and a coda, which provided the template I needed. Sonata form for individual movements also offers a story structure, moving through stages of exposition, development, and recapitulation, which I used to shape the piece’s progression through the first, second, and third prose movements. While any music theorist can easily pick apart the liberties I’ve taken with the form, I hope the labels invite readers into the work as a piece of art that elevates the significance of the everyday. I also hope they are swept up on a journey that moves them emotionally even if they can’t quite explain why (which is how I feel when I listen to classical music).

On another level, I also liked the idea of calling the piece a sonata because music is a performed type of art. In many ways, a first date is also a performance: you are performing yourself for the other person.

Capsule Stories: What ideas or images did you cut from earlier drafts of this piece, if any?

Emily Polson: Normally I end up cutting a lot because I’m a chronic overwriter, but this piece started as a few sparse scenes of descriptive writing in my journal. I then expanded it very deliberately after deciding to work with the sonata form, drawing out a series of parallel elements in each movement. For example, each one needed a subtle moment where I (the speaker) feel out of my element, one where my date pauses to think, one where he shows he is paying attention, and one where he reveals he’s not. The challenge for me was to write in those moments in a way that would read as seamlessly building to something rather than stilted repetition.

Capsule Stories: You write: “He pauses to stare into the sky, the liquid in his clear plastic cup almost a reflection of the dusky sunset framing his body, the light catching the edges of his dark skin, making him glow, while fireflies flicker in the background. I frame the photo in my mind, imagine it bordered in white on a phone screen.” Can you talk about this idea of being in the moment yet imagining it through a screen, of the challenges of capturing memories in the digital age?

Emily Polson: The white border is a reference to the design of Hinge, the app where my date and I met. With online dating, there’s an unavoidable juxtaposition of the person as you are introduced to them digitally and the person as a physical entity when you first meet IRL. The quote above is my brain flickering between those two versions, thinking about how the photos of him I saw online also came from real-life moments like the one we were currently living. In that scene, I think the impulse to capture the experience can be read as a sign of connection (think of Jim and Pam taking mental pictures on their wedding day in The Office) or a sign of disconnection (my mind is drifting back to the app and wondering what this hypothetical candid shot would look like on his profile). Or it can be both.

Similarly, I have mixed feelings about the general human impulse to “capture” the moment, but I think that applies to both documenting with photos/social media and recreating the memory in another form, like a piece of writing. Having memories is what makes us feel like our time—and by extension our life—has been well spent. Moderately documenting my life and sharing it online has helped me “file” my memories and self-reflect on my personal development through the years, just like writing nonfiction has. But both can also develop into the impulse to dwell on a romanticized version of the past or turn our lives into a performance. Concerning the latter, I have a bad habit as a memoir writer of thinking about writing about an experience while I’m living it; even if I’m not taking photos or tweeting, I’m taking note of sensory details, bits of dialogue, and emotional responses, and occasionally even making life choices because they will lead to a “better story.” Is this any better because the end result is “art”? Of course I’d like to think so, but when it goes unchecked, this takes me out of the moment just like posting too many Instagram Stories might. I suppose it comes back to intention (who is this for and what purpose does it serve?) and balance (how much is needed to achieve my intended purpose?).

Capsule Stories: In the story, the conversation turns to the movie Frances Ha, directed by Noah Baumbach: “‘My Frances Ha story?’ Then I recall the scene in the movie—the one he remembered was my favorite—where the title character asks her best friend to tell ‘the story of us’ with its far-reaching dreams and unrealistically beautiful futures.” Tell us about this movie and why it features so prominently in this piece!

Emily Polson: Frances Ha is a New York City struggle story starring Greta Gerwig as a dancer navigating a series of temporary living situations, a plateauing career, and rocky friendship dynamics while pursuing her dreams. I watched it right before moving to New York as an aspiring book editor, and it shaped my expectations of life in the city for broke twentysomethings.

The movie features a series of vignettes that, with the help of recurring motifs, builds to a satisfying story. That’s also the approach I took for “First Date Sonata,” which I want to feel like a sequence out of an indie movie, complete with an underlying soundtrack. People my age talk about the importance of romanticizing your life, or pretending you are the “main character”; the piece plays with that idea in the line, “My life directed by Noah Baumbach.” But while Frances Ha has a number of rose-colored scenes, it also paints the awkward, the unfortunate, and the low moments. “First Date Sonata” offers the fun, the flirty, and the playful parts of a first date, but it also reveals moments of inauthenticity and disconnection. And once again, this reference to a type of performance art—in this case acting—plays into the theme of people on a first date performing for each other.

Emily Polson: So much about my writing life has changed since March 2020. I live in New York and used to spend two hours commuting by subway every weekday, filled my nights and weekends with social outings and freelance content writing, and was also aggressively applying for my dream job; unfortunately, my personal writing fell very low on the priority list. With work from home, social distancing precautions, and pandemic-era hiring freezes, though, I suddenly had a lot more time on my hands and needed to restructure my life with new meaningful pursuits in order to “fight the creeping sense of dread,” as the Mountain Goats lyric puts it.

I began writing during the hour before work and recruited a few friends to form a creative writing workshop group with me over Zoom. Because I wasn’t spending as much money, I also felt comfortable giving up freelance so I would have more energy for my own writing. And while I did fall prey to doomscrolling on social media a lot, I also fell down a Twitter rabbit hole of new literary magazines with calls for submissions and began sending in my work. Between my writing group and a few publications, I’ve found the accountability and motivation needed to maintain these good writing habits as we transition back into “regular” life.

Emily Polson: I recently finished revising my tenth (and final) draft of an essay I started in 2015 called “My Nick Carraway Summer,” which chronicles a sweat-soaked season in my college town of Jackson, Mississippi, where I worked three jobs and fixated on two Gatsby-like men in my new social spheres while trying to outgrow the role of passive observer in my own life. The prose style mirrors elements and scenes from F. Scott Fitzgerald’s masterpiece. It took forever to finish, because until recently I hadn’t actually learned the lesson I claimed to have learned by the end of the piece—the annoying thing about writing nonfiction is never being sure whether you’ve lived the “end” of the story. The finished essay is over 11,000 words, though, so I’m having trouble finding places to submit it!

I’m also working on more short nonfiction pieces (I’ll nail the “triptych” form one of these days!) and some poems, and I am getting back into short fiction (which I haven’t written since my junior year of college in 2015!). This fall, I have two poems forthcoming in Capsule Stories Autumn 2021 Edition.