Amy Wang on Exploring Grieving Without Letting Go in “Ghosting” 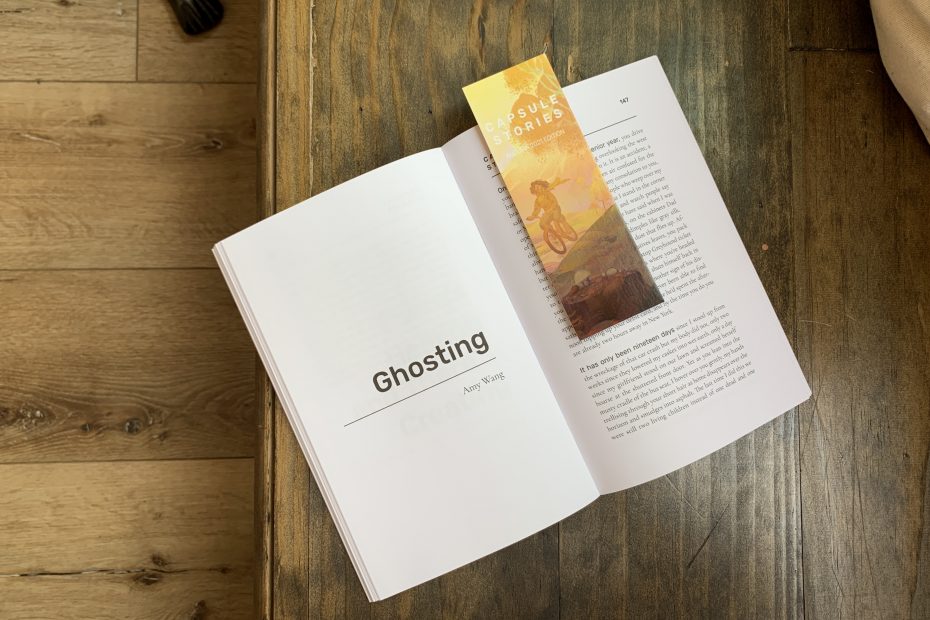 Amy Wang is a writer from California. In her free time, you can find her reading fanfiction. Her work is published or forthcoming at Twin Pies Literary, Ogma, and X-R-A-Y Literary Magazine.

Amy Wang’s short story “Ghosting” is published in Capsule Stories Autumn 2021 Edition: Dancing with Ghosts. The story is told from the perspective of a boy who died in a car crash as he follows his twin brother to New York City and watches his brother grieving and trying to move on.

Amy Wang: Initially, I planned to write this story from the perspective of a girl looking back on her childhood sweetheart. The idea of a ghost looking on as the person they loved most mourned them, let their grief take over, and eventually moved on was something that has always been interesting to me, and I thought romance would be the best way to draw out the story. As I wrote, however, this piece evolved into something that felt less romantic, and thus less suited to the complications of romance, until it was finally revised into what you see today.

Capsule Stories: “Ghosting” explores two parallel stories of grief of the twin who lived and the twin who died. How do you approach exploring the nuances of grief in your writing? What drew you to this theme?

Amy Wang: I wanted to do the feeling of grieving justice with this piece, so I tried to explore it with as much depth as possible. Grief in general is something that I’m sure many people are familiar with, but reversing the perspectives is something I’d never really seen before. I understand that mourning manifests itself in different ways for everyone, but through my own experience, sometimes grieving without letting go can be a damaging thing. So I wanted to explore that, as well as the idea of mourning from a two-sided viewpoint.

Capsule Stories: Although the story is told from the perspective of a dead twin, the ending isn’t tragic. You write: “On my tongue, there is the bittersweet taste of letting go. As I close my eyes and you open them, I am grateful. Finally, that you’re ready to move on. Already, I can feel myself turning into dust. Release is gentle, I find. In my last moments, my eyes are filled with your smile. How lovely you look, breathing freely.” Why did you want to write a relatively optimistic ending to this story about grief?

Amy Wang: I think so often in literature there’s always a sad, immutable finality about death, and I wanted to subvert that kind of expectation, at least a little bit. I really wanted to move through the idea of catharsis for the person who has passed—the main goal of this story was to get a look beyond the raw, human grief for those who are left behind, because in my personal experience grieving has always been somewhat of a one-sided thing. While the overall tone of the piece isn’t explicitly hopeful, I wanted to express the idea that moving on can be a healthy, gentle thing to do.

Capsule Stories: Your prose is so beautifully written. What other writers have influenced you stylistically?

Amy Wang: K-Ming Chang and Carmen Maria Machado have always been huge inspirations of mine. In the Dream House and Bestiary are books I find myself returning to, over and over, because they’re such beautiful and thoughtful works of literature. K-Ming Chang in particular just uses such interesting metaphors, and I love the freshness of her prose.

I also find myself bouncing off of my writer friends’ work when we workshop together, specifically Nova Wang and Emma Chan.

Capsule Stories: Do you also write fanfiction? How has reading and writing fanfiction influenced your writing?

Amy Wang: I do, actually! Reading and writing fanfiction has always been somewhat of a cathartic exercise for me—I read fanfiction as a way of escaping real life, and I write it in order to add my own interpretations of a fictional reality. Writing fanfiction is actually where I first learned to flesh out narratives—trying to work with an established identity is freeing in a sense, because you have to write in a way that moves naturally with the narrator, compared to other kinds of writing when you can change the narrator to fit the story you’re trying to tell. Specifically, I’ve learned a lot about tone and voice from my time as a fanfiction writer.

It is also easier to write fanfiction, in a sense. Instead of having to flesh out characters, or develop my own world, I can occupy someone else’s headspace and work from there, and I really love the ease with which you can just slip in and out of a whole universe.

Amy Wang: I’m currently working on a novel about familial trauma and mother-daughter relationships, so we’ll have to see how that goes.

You can find Amy Wang on Twitter at @amyj_wang.