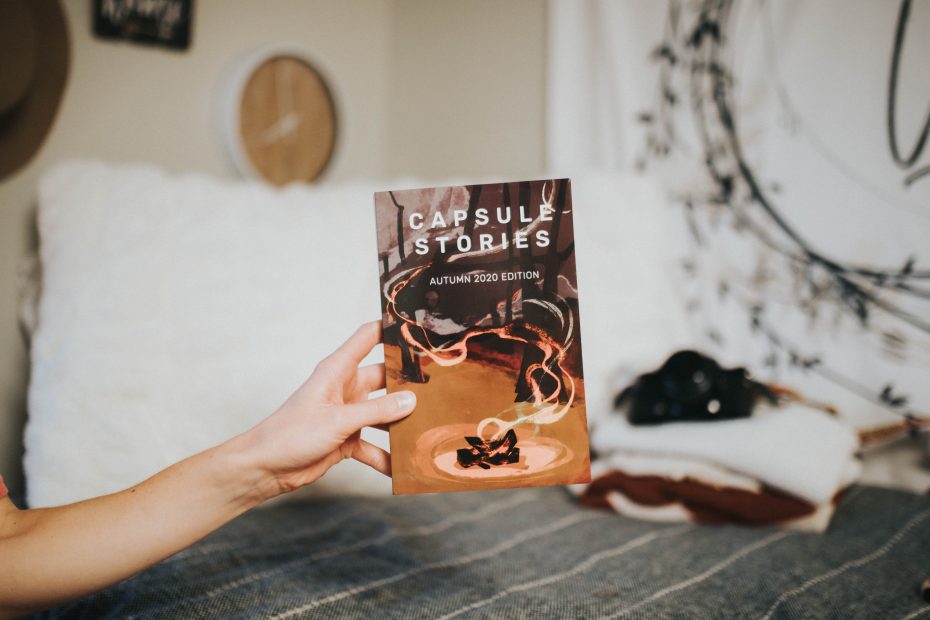 Claire Taylor is a writer of poetry, short fiction, and the occasional essay. She makes up stories for kids in her monthly newsletter, Little Thoughts, and has written several picture books that are searching for a publishing home. Her work has appeared or is upcoming in Kissing Dynamite, Capsule Stories, American Writers Review, perhappened mag, and more. She lives in Baltimore, Maryland.

Her short story “Retreat” is published in Capsule Stories Autumn 2020 Edition. In “Retreat,” Alanna attends a wellness retreat for women who have lost a child or pregnancy, but she is scared to share the story of her own grief and loss with the other women. In a moment of vulnerability, she reveals her haunting secret.

Claire Taylor: I wrote “Retreat” based on the theme for Capsule Stories Autumn 2020 Edition, Burning Up. I’d had the general idea for a story set at some kind of wellness retreat for a while. I’ve been a massage therapist for over a decade and have had exposure to a lot of different parts of the wellness industry. The story’s opening line is actually borrowed from my own experience at a yoga workshop where another participant went on at length about her use of jade eggs. It was really something.

The autumn focus of the theme gave me the idea to base the retreat around the autumnal equinox, and the rest I came up with to satisfy the fire and burning up part of the theme. This was actually my first time writing specially to a theme. In the past I’ve either had a draft that already fit, or I’d just tweak something a little bit.

Capsule Stories: How did the process of writing a story with a specific theme in mind differ from your usual writing process?

Claire Taylor: I had to find the right balance of when and how to lean into the theme. Initially I planned to have the source of Alanna’s guilt directly involve fire in some way, but I couldn’t make that work with the buildup I wanted to create in revealing her reason for being at the retreat. So instead of using fire as a destructive force, I shifted to having it be a means for catharsis and cleansing, which fit well with what you might expect from a healing retreat, and I focused instead on the sense of a slow burn, both for Alanna emotionally and in the way her story is revealed. I wanted lots of different types of heat: shame, guilt, irritation, anger, and the physical heat from both the fire and as part of the incident. Having the theme of Burning Up in my mind was really helpful in pulling all of those elements together.

Usually when I write, I start with an opening image and an idea of what I want the main crux of the story to be, and the details develop as I go. Writing to a theme shifted my process a bit so that I settled on some of the more specific details first before I had a clear sense of what the story was and how I wanted it to play out.

Capsule Stories: “Retreat” builds up to the subtle reveal of what Alanna did, which is so carefully crafted to keep the reader in Alanna’s point of view rather than go into the details about what she did. How did you balance giving the reader enough pieces of the puzzle to figure out what happened to Alanna with centering Alanna’s point of view and her present grief and shame?

Claire Taylor: Your editing notes were an essential part of achieving the right balance! I obviously had a clear picture of what was being hinted at in the story, and it was very important to me not to state outright what happened to Alanna. One of your comments was that it was a little unclear to readers exactly what had occurred, though. Together we were able to bring some clarity without having to sacrifice the focus on Alanna. The incident is Alanna’s fault, but she’s not actually present for it. So her memory of it is part flashback, part imagination. Her grief is centered in what is imagined, and her guilt stems from what is remembered.

I think as parents, there are experiences, tragedies that you can view with empathy and understanding if they happen to someone else but that you’d never be able to forgive yourself for personally. Alanna’s mistake feels unspeakable for her because of the horror of the experience but also because of her shame. She can’t keep the memory of it from invading her thoughts, but she’s also so ashamed of what happened that she’s determined not to share it. She would never come out and directly say what happened, and I wanted the reveal to have that same tension. There’s enough there to make it clear without revealing more than Alanna would ever share.

Capsule Stories: Your story “Retreat” and your poem “To My Son,” published in Capsule Stories Isolation Edition, both explore motherhood. What draws you to writing about motherhood?

Claire Taylor: The short answer is that motherhood is the most consuming part of my daily life, especially with the pandemic putting a halt to work, childcare, and the ability to get my kid out of the house and around other children. I have a three-year-old who doesn’t leave me with a lot of time or energy to focus on much else, so the motherhood experience is always really immediate in my mind. Write what you know, and all that.

But I also think there’s so much complexity and emotion in mothering that is interesting to explore. We tend to think of motherhood as a fairly universal experience among those who pursue it and there’s certainly a lot of support and camaraderie to be found in the shared trials and tribulations of raising children, but in truth it’s an incredibly personal, individual endeavor. Every child is different. Every mother is different. There are fears and difficulties that are felt by all parents, but the lived experience of mothering your own child is unique. As a white cishet mother, some of the most significant and pressing concerns for other parents are not at all a part of my experience. And as a person who suffers from depression, I know I’ve had parenting difficulties that friends who do not suffer from mental health disorders haven’t dealt with.

I like trying to tease out both the universal and the unique in my writing about motherhood. And I think it’s important to portray the complexity of mothers, both in my writing and through the act of writing. Though our children may require the majority of our attention at times, we are more than just this one thing.

Capsule Stories: Tell us about your newsletter Little Thoughts and why you started it.

Claire Taylor: After my son was born, I started writing picture books mostly because I was spending so much time reading them. I found a picture book agent and got through a few steps of the process at a couple publishing houses with two different books, but I ultimately was unable to get a contract, and then I lost my agent. I was left with all of these stories I’d written for kids that I still really wanted to share. I’ve continued querying agents and independent publishers, but I had been thinking about doing a newsletter for a while.

There are so many newsletters these days, but not that many are written specifically for children. When the pandemic hit and everything shut down, I decided to launch Little Thoughts as a resource for kids and parents who suddenly found themselves stuck at home during a stressful, unpredictable time. New issues come out monthly and include an original story or poem that I have written, a picture book recommendation, and an at-home activity or creative prompt that relates to the general theme of that month’s story. Also, I feature artwork from kids in each issue as illustrations.

Both the newsletter and writing for kids in general have been such sources of relief for me. My writing tends to gravitate toward heavier themes and a lot of introspection. In “Retreat,” Alanna bemoans all these women so openly sharing their feelings. I’m like those women when I’m writing. Alanna would absolutely hate me! Writing for kids is a nice break from that, as well as a way to challenge myself to tell different kinds of stories in a way that is a real departure from the rest of my writing.

Claire Taylor: I’ve had more time for writing, which I guess has been one bright side to everything shutting down. Before, I would have to fit writing time into my work schedule and usually squeezed it in between appointments. Massaging people is also really draining, so it was really hard to come home and write at the end of the day. With my business shut down, I’ve been able to redirect that time and energy toward writing, but I am still squeezing it in at odd moments. I do most of my writing during my son’s nap or after he’s gone to bed. And I have notebooks stashed all over my house so that whenever an idea pops into my head I can quickly scribble it down and then go back to playing Zingo.

Even prepandemic I would get the most clarity on a writing project while I was out on a run. Whenever I’m working through a story or poem and I’m struggling with making it come together the way I want, I always realize exactly what I need to do to change it up while I’m halfway through a run. It’s great because my problem is solved, but I’m miles away from home with nothing to write with and I don’t carry my phone with me on runs, so I just have to repeat the idea or the line over and over to myself until I get back to the house.