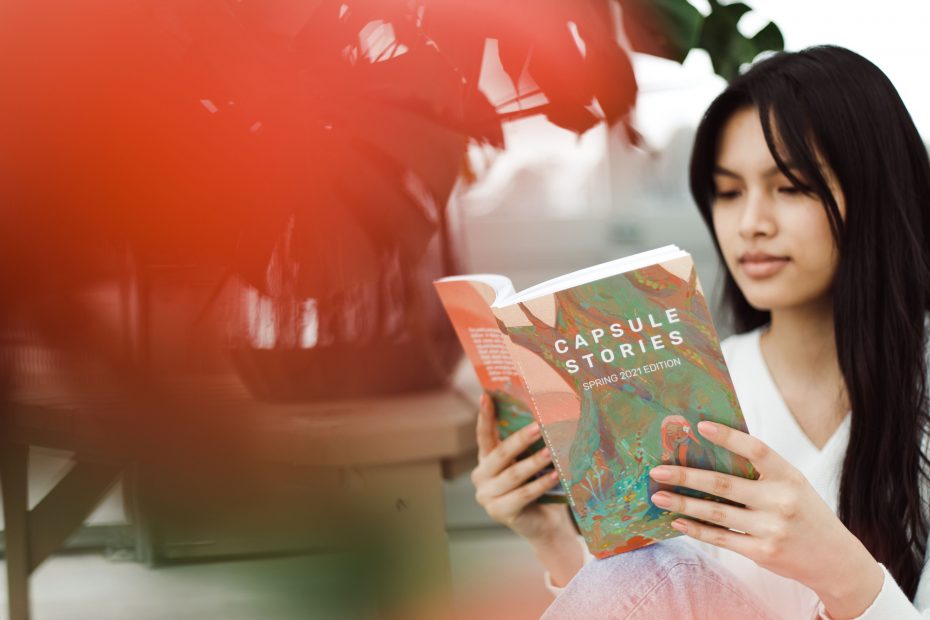 Christine M. Estel lives and writes in the Philadelphia area. Her creative nonfiction story “In April, After I’m Twelve” is published in Capsule Stories Spring 2021 Edition. The story narrates the exact moment when Christine experienced her first period and the embarrassment that followed.

Capsule Stories: What came first with this story—the flower metaphor, the theme of blooming, the experience of puberty? Tell us about the story’s conception.

Christine M. Estel: The experience itself definitely came first in my mind. Because the moment of getting my first period would be an obvious transition between childhood and adolescence, I’d been hoping for something more graceful, less anxiety-inducing, more comforting and warm. But I felt my mother handled my transition with pragmaticism—apathy?—and my immediate feeling of helplessness made those moments so vivid for me. In finally writing this story, I realized that that moment at twelve unfortunately later served as a reminder to handle things on my own so I wouldn’t be disappointed when I didn’t receive the emotional (or other) support I needed.

Capsule Stories: You use flower-based imagery to describe the changes a girl’s body goes through in puberty: “My body had already been budding pink-tipped porcelain bulbs and had been sprouting stamen a couple shades darker than I’d been expecting.” Why did you want to use this metaphor to explore puberty?

Christine M. Estel: Obviously puberty is a time of growth and change, much like flowers that begin as seeds and then grow to seedlings and beyond. During that time of growth, flowers need attention and care; pruning; tending. Without gentle cultivation, flowers have a hard time becoming the best versions of themselves. My experience with puberty began alone, where no one was aware until I mentioned it, and then I felt I had to navigate through it over the next several years, on my own, which is a scary, lonely place to be. Some days I feel like I’m stuck in that initial place, still trying to figure out how to become the best version of myself.

Capsule Stories: There’s an interesting contrast between the budding flower metaphor and the way your mother handled your puberty: “hiding, keeping it distanced, speaking only in whispers.” Can you talk about this contrast and the experience of writing about a puberty story that isn’t all sunshine and roses?

Christine M. Estel: In many ways I felt suffocated in childhood and adolescence, yet in other ways I felt neglected. Puberty was no exception to this: when I needed guidance on how to get through unscathed (or as close as possible), I felt alone and tasked with finding my way to the sun on my own. I had too many “problems,” like my acne, wild hair, large cup size, wide nose, and other physical features that often left me hating how exposed I was, and feeling ugly and unworthy. Those internal insecurities—coupled with the lack of encouragement, assurance, or even acknowledgment of who I was becoming from anyone external—terrified me that my inner thoughts were, in fact, reality. Writing this story was quite painful because I had to revisit and walk through a vulnerable moment, the one that marked the next several years of unsurety.

Capsule Stories: What ideas or images did you cut from earlier drafts of this story?

Christine M. Estel: This story was a very rare circumstance in that I submitted on a whim with my second draft, but I think I knew subconsciously that writing it and having it “out there” would be cathartic to some extent. I did not include any additional images or ideas in the first draft, as I was certain that the flower imagery was right and necessary for my story. My diction, syntax, descriptive language, and overall style were my areas of focus and refinement between the two drafts.

Capsule Stories: What other writers have influenced you, and specifically, this story?

Christine M. Estel: At first I didn’t think this story was influenced by any particular writer. However, after careful reflection, I realized that Hannah Grieco’s November 2020 story published in Passages North, “Tradition,” kept circling in my mind as I began writing my own story. Though her story has nothing to do with puberty, I read it as a story of change and growth, specifically the narrator’s honesty and journey into figuring out who she was.

Additionally, Claire Taylor’s “After the Fire,” published in Mum Life Stories, was also dancing in my memory as I wrote my story. I remembered how she recounted the story about her son’s injury on the coffee table and her panic while driving him to the doctor’s office afterward, which connects to her own mother’s trembling during and after the family’s kitchen fire, a connection that could only happen because of their shared motherhood. In writing my story, I realized I was documenting how difficult puberty was for me and finally voicing aloud the insecurities I felt so that I can better understand and advise my infant daughter when she gets there one day.

You can find out more about Christine M. Estel’s work on her Twitter, @EstellingAStory.