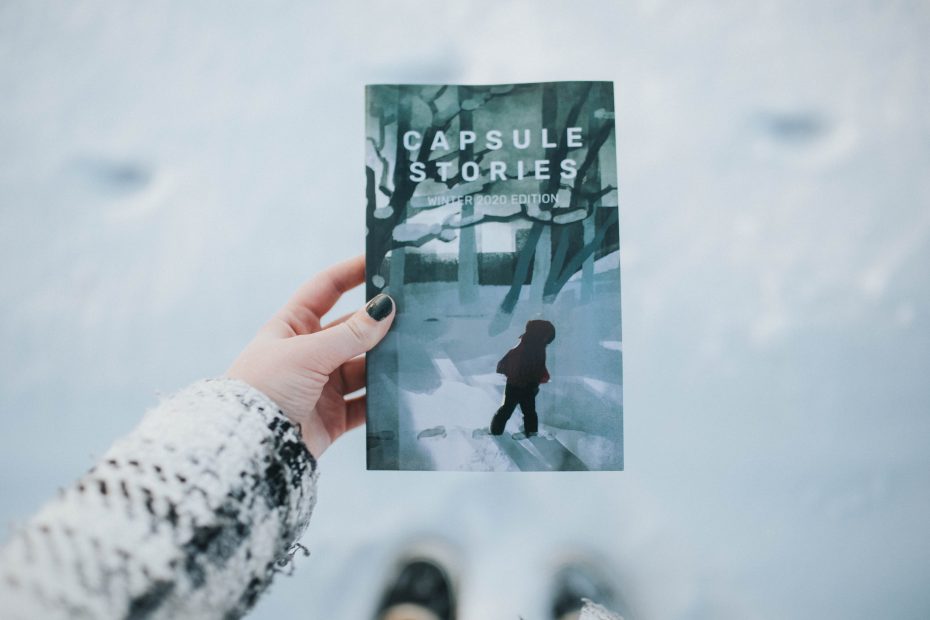 Abigail Swoboda is a poet and kindergarten teacher who lives in Philadelphia. Their short story “Dandelion-Head” is published in Capsule Stories Winter 2020 Edition and was nominated for the Pushcart Prize and Best American Short Stories. Stepping away from the rest of the world for a moment, Mary and Jay spend a season in a motel as they heal together in small moments after sustained trauma in “Dandelion-Head.”

Capsule Stories: What came first with this story—the characters, the plot, the structure, the setting of a motel? Tell us about the story’s conception.

Abigail Swoboda: The fantasy came first, I think. The desire to step away, to heal, to watch the people I love heal alongside me. In this sense, I suppose the characters came first, too. This story was largely borne out of the fantasy scenarios I would imagine in my head when I thought about my future and my future with the people I love and care about. This was always a future that afforded me—and, moreover, us—the space needed to process, to be vulnerable, and to honor the trauma that we will always still be enduring in some way. And this is a fantasy that I have come to believe is possible, liveable, real.

Capsule Stories: Throughout “Dandelion-Head,” we get these scientific interludes about the five stages of decomposition, following the death of the deer that Mary sees outside the motel. These interludes also speak to the transformation that Jay and Mary go through together in the motel. Tell us about why you decided to structure the story in this way and include these interludes. What effect do you want it to have on readers?

Abigail Swoboda: This is an element of the story that has had many different lives, but from the very beginning, I was devoted to this parallel story of decomposition. Growing up, I remember riding the bus to school and keeping track of roadkill along our route over the course of weeks while they decomposed. I was always comforted by their presence, by their process. I think that a breaking down and a disappearing like that portrayed in decomposition can be a very positive thing, a healing thing. Sometimes you need to let some parts of you go. So the stages of decomposition serve as a metaphorical parallel, but they also serve a formal purpose, as I intended for these sections to let my reader breathe a little. Though this piece deals with very large and heavy subjects, I never wanted it to become too much. Trauma itself is not the center of this piece; rather, I wanted to center intimacy, and I think that this necessitates a certain lightness, which I tasked the stages of decomposition with mainly. This is also a piece that spends much of its time apart from the world, and the stages of decomposition remind the reader of this world that, despite our best efforts, is always happening forever. And that this can be a strangely beautiful thing.

Capsule Stories: Your bio on your website says you “seek to explore . . . the tenderness uncovered in fractured places,” which you do so well in this story’s examination of the process of healing after trauma. Can you talk about the importance of this theme in “Dandelion-Head” and in your wider body of work?

Abigail Swoboda: All spaces hold the possibility to be sites of self-exploration, of love, of healing. Even a motel room during a power outage. Even the hardware store lighting department. Even the local diner at 5 a.m. Especially these spaces. These are the spaces that survivors come to own. These are the spaces that held me when I most needed to be held. For example. Growing up as a queer person in a small, rural town, I was often sold this idea that I needed to move to the city in order to live a fulfilling life, that rural spaces were unable to hold me tenderly. Well, I did move to the city and have been living here for about five years now, and I am upset that rural spaces were portrayed to me, as they so often still are portrayed to young queer people, in such a way. I am of the mind that all spaces have the ability to hold, especially the unexpected. This is something that Jay and Mary come up against: trusting not only each other but trusting space with their growth. This is a concept that I understand most of my work to be tied up with, the relationship between place and self. I often muse that one could literally map the body of my work. Someday I know I’ll try this.

Capsule Stories: One of the remarkable elements of this story is the tenderness and intimacy between Jay and Mary. Talk about bringing these characters and their relationship to life. How did you approach writing these characters?

Abigail Swoboda: It’s trite, but I really think that I’m still caught up in the project of writing the stories I need and have needed in the past. Jay is based in large part on my adoptive brother, and the relationship that Mary and Jay have is reflective of the relationship the two of us have, which I had never seen portrayed in any media before. This relationship was one I felt and still feel the need to write, because it is something I feel the need to share. For me, at the heart of this story is the particular intimacy of friendship. I felt then as I feel now an urgency to express that particularity, that intimacy, and the nonlinearity associated with a process of healing. I think that part of writing this had to do with normalizing some of the things my brother and I went through together as a result of trauma—something like still having some healing to do even after moments of closeness or catharsis, something like tenderness that is learned with practice, however awkward. In a way, writing these characters felt like an act of self-love. To write Mary and Jay learning to embrace their bigness and accept their lovability was often to reinforce these same things to myself. That’s something I needed personally, and it’s also something I needed to communicate to others.

Capsule Stories: You also write poetry. How have your experiences writing poetry affected how you approach writing prose?

Abigail Swoboda: I’ve always approached this question comedically. I have a degree in prose writing, and I almost exclusively write poetry. This is very funny to me. I don’t write very many prose pieces, so when I do find myself writing prose, it feels very necessary, and in a way this is much the spirit of poetry for me. I am deeply invested in the sound that language makes. My poems are always meant to be read aloud, and I don’t see this as being different when it comes to my prose. In editing, I read “Dandelion-Head” aloud to myself and others plenty of times. Poetry has helped me to prioritize the feeling of how the language of a piece of writing sits in the mouth. My prose is inflected with this consideration. I also find myself placing the most important puzzle pieces of my prose in the minutiae, in the tight corners, in the details like I would a poem. This worked out formally very well in “Dandelion-Head,” where all the big stuff is rooted in the small.

Abigail Swoboda: My debut poetry chapbook VISCERA AMERICANA is coming out with Thirty West Publishing House next month, so that has certainly been the most immediate and consuming project on my desk for the last couple months. Otherwise, I’m also wrapping up work on a sonnet series using almost exclusively found text that works to chronicle the idiosyncrasies of life in the small rural town where I grew up. I have always had my fingers in experimentation, but I’m looking forward these days at really devoting my time and work to figuring out what that means in terms of my writing.

You can find out more about Abigail Swoboda’s work at their website abigailswoboda.com or find them on Twitter at @orbigail.

You can read “Dandelion-Head” in Capsule Stories Winter 2020 Edition, available in paperback and ebook wherever books are sold.